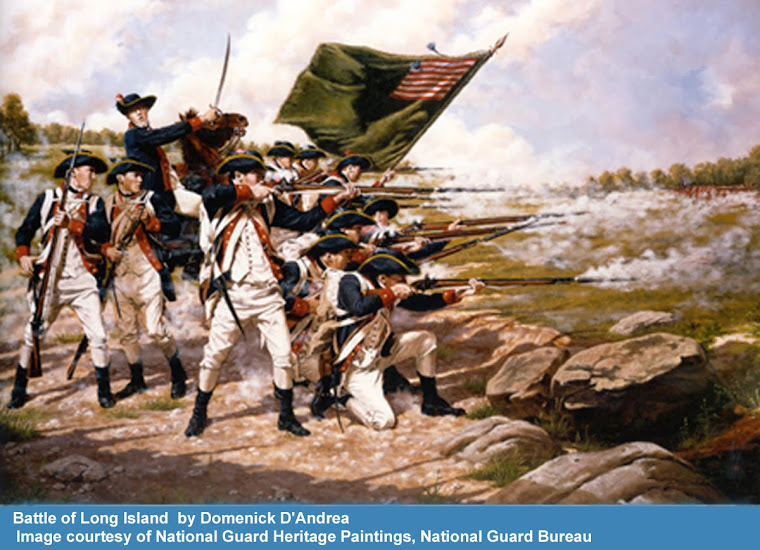 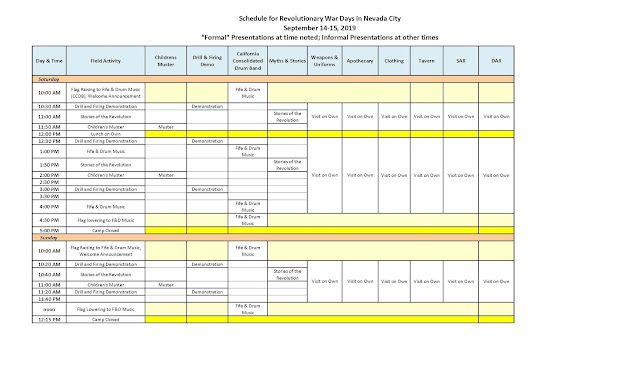 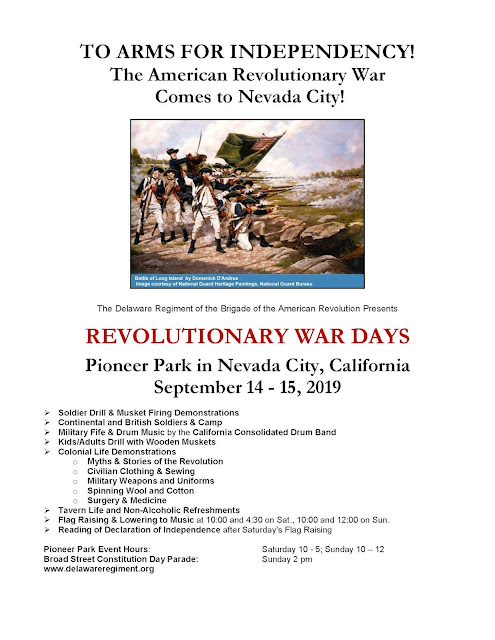 Mark your calendars for "Revolutionary War Days in Nevada City, CA. Parade on 15 September 2019, Sunday.
More to come as we get closer to the event.
Posted by John Hess at 8:53 PM No comments: 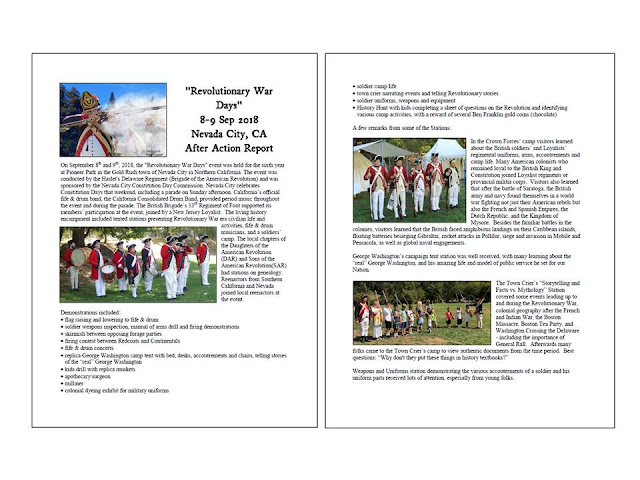 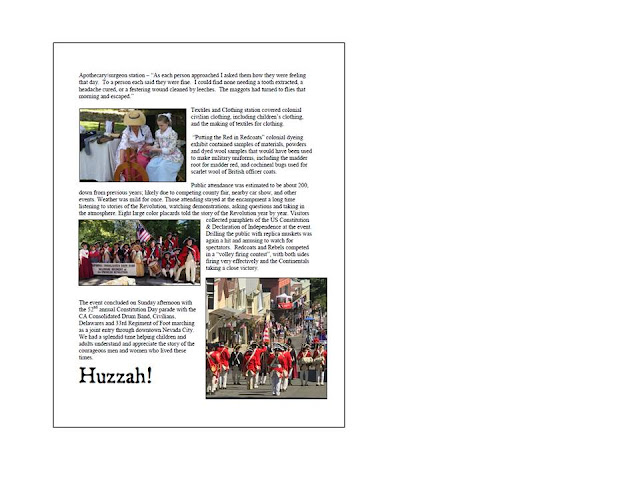 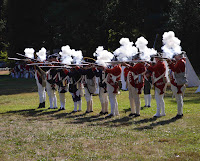 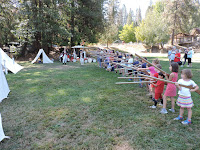 Besides these demonstrations, kids and adults may drill as Minutemen with wooden muskets.   Budding historians can engage in a scavenger-hunt-like history quiz ending at George Washington’s headquarters tent. Members of the Sons of the American Revolution and Daughters of the American Revolution will also be present to discuss genealogy and your possible connection to our Patriot ancestors. 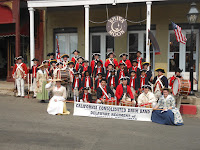 Flag raising and lowering at opening and closing times will be accompanied by fife & drum music performed by the California Consolidated Drum Band.  This is California’s official fife & drum band, which will play additional music throughout the day.

Sunday September 9 from 10 AM to Noon.

And don’t miss the Constitution Day parade down Nevada City's Broad Street, beginning at 2 PM on Sunday.  Our group is entered as a marching band and will include fifers & drummers, Continental soldiers, Redcoats, Colonial Loyalists, and Civilians.

Come see the Delaware Regiment at Mount Vernon Memorial Park in Fair Oaks, CA, near Sacramento. The event has many eras and participants. Rain or shine, 10 am to 2 pm. 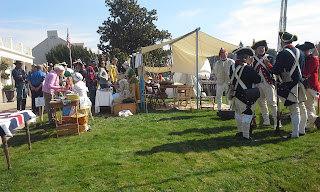 On September 9th and 10th, 2017, the "Revolutionary War Days" event was held for the fifth year at Pioneer Park in the Gold Rush town of Nevada City in Northern California. The event was conducted by the Haslet's Delaware Regiment (Brigade of the American Revolution), and was sponsored by the Nevada City Constitution Day Commission. Nevada City celebrates Constitution Days that weekend, including a parade on Sunday afternoon. California’s official fife & drum band, the California Consolidated Drum Band, provided period music throughout the event and during the parade. The British Brigade’s 33rd Regiment of Foot supported its members’ participation at the event, joined by a New Jersey Loyalist.  The living history encampment included tented stations of Revolutionary War era civilian life and activities, fife & drum station, and an encampment of soldiers’ tents.

Demonstrations included:
·   flag raising and lowering to fife & drum
·   soldier weapons inspection, manual of arms drill and firing demonstrations
·   skirmish between opposing forage parties
·   firing contest between Redcoats and Continentals
·   fife & drum concerts
·   replica George Washington camp tent with bed, desks, accouterments and chairs, telling stories of the “real” George Washington
·   kids drill with replica muskets
·   colonial chocolate beverage
·   apothecary/surgeon
·   milliner
·   soldier camp life
·   town crier narrating events and telling Revolutionary stories
·   soldier uniforms, weapons and equipment
·   Sons of the American Revolution (SAR) station on genealogy and American flags
·   History Hunt with kids completing a sheet of questions on the Revolution and identifying various camp activities, with a reward of several Ben Franklin gold coins (chocolate)
Public attendance was estimated to be about 300; good considering the very hot summer, although event weather was milder.  Those attending stayed at the encampment a long time listening to stories of the Revolution, watching demonstrations, asking questions and taking in the atmosphere. Eight large color placards told the story of the Revolution year by year. Visitors collected pamphlets of the US Constitution & Declaration of Independence at the event.  Drilling the public with replica muskets was again a huge hit and amusing to watch for spectators.  Redcoats and Rebels competed in a “volley firing while advancing” race, with both sides firing very effectively and the Redcoats taking a close victory. Reenactors from Southern California and Nevada joined local reenactors at the event. An evening group dinner at a nearby Nevada City restaurant in uniform provided well deserved relaxation and entertainment. The event concluded on Sunday afternoon with a Constitution Day parade with the CA Consolidated Drum Band, Delawares and 33rds marching as a joint entry through downtown Nevada City.  (We placed 2nd in the parade, behind the Submarine Veterans.)

We had a splendid time helping children and adults understand and appreciate the story of the courageous men and women who lived these times.
Huzzah! 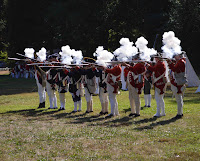 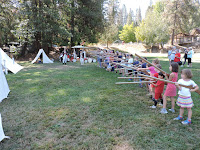 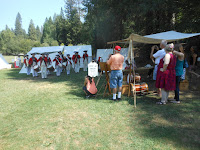 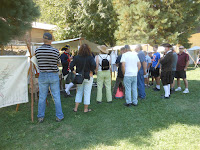 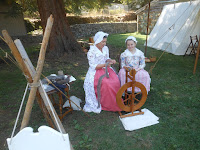 Purpose: We reenact the Delaware Regiment in the American Revolution to educate the public and ourselves about American History, and to show that history can be fun and inspiring. We supplement existing California Revolutionary War units, by representing the Continental Army in public and private events, and including Civilian, French and Eastern Indian impressions in our Unit. We are most definitely family oriented.

Focus: The focus of the Unit is on Delaware Continental soldiers, but important and essential components also include Civilian Camp Followers & Tradespeople, French military, and Eastern Indians. Female soldiers will be allowed, as long as reasonable concealment of feminine identity is possible.

Membership: The Delaware Regiment (DR) is a member of BAR. Contact John Hess through this blog regarding joining DR. We are recruiting!!!

The Delaware Regiment was approved by the Continental Congress in 1776 and commanded by Colonel John Haslet. With the death of Col. Haslet at the battle of Princeton in 1777, David Hall was made Colonel and commander of the Regiment, followed by Kirkwood in 1780. The Regiment has a long battle record, and participated in long marches up and down the Eastern coast. Engagements included Long Island, White Plains, Mamaronek, Trenton, Brandywine, German town, Monmouth, Camden, Cowpens, Guilford Courthouse, Hobkirk’s Hill, Ninety-Six, Eutaw Springs, and Yorktown. The Delaware earned unstinted praise for steadfastness and valor. Captain Enoch Anderson tells us “Let it be observed here, once and for all, the Delaware Regiment was never broken, no, not in the hottest fire!” General Henry Lee declared, “No Regiment in the Army surpasses it in soldiership!” Their enemies knew the Delawares as “The Regiment Sterling”. Contemporary chronicles acclaimed the Delaware Regiment as the most efficient in the Continental Army.

"A nation that forgets its past can function no better than an individual with amnesia." - David McCullough

"History is a guide to navigation in perilous times. History is who we are and why we are the way we are." - David McCullough

"You can't be a full participant in our democracy if you don't know our history.” - David McCullough

"How can we know who we are and where we are going if we don't know anything about where we have come from and what we have been through, the courage shown, the costs paid, to be where we are?” - David McCullough

John Hess
Somerset, California
John Hess is a Private in the Delaware Regiment, and Unit Clerk. Contact me at jhess1776@innercite.com regarding inquiries or membership.